Nestled away in a quiet seaside town in Tasmania, Pete Jermy Secondhand books is a treasure trove of classic and pre-loved books just waiting to be re-discovered.

One of the biggest treasures of the shop however is it’s owner, Pete. While he may like to think of himself humorously as a black books style proprietor, in fact – he is quite the opposite: a wealth of knowledge and always greeting customers with a trademark smile and friendly welcome.

He’s also amazingly able to know where any book in his vast collection may be hiding away, which is a skill in itself if you know the shop and Pete. Of course, the seemingly untamed piles of books are all part of the charm of the shop, and the fun of discovering a hidden gem. 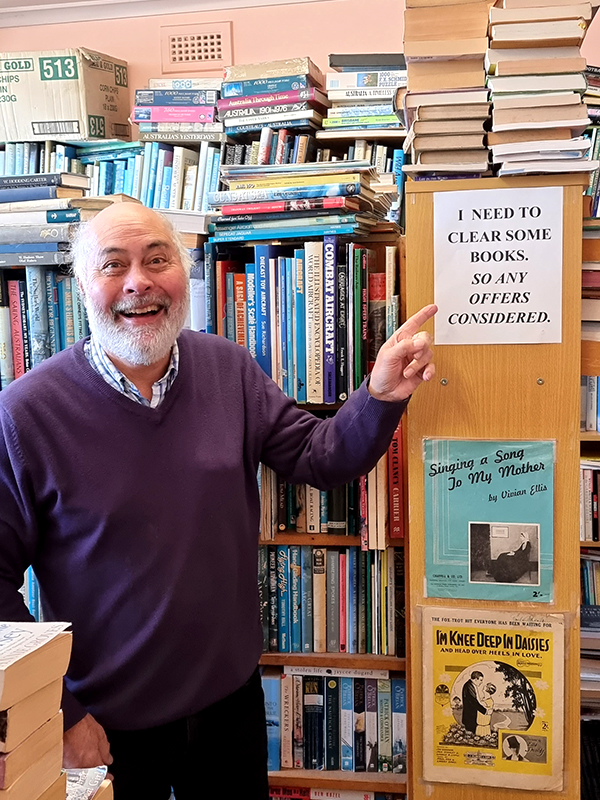 A love of books came from his early childhood, as he found a sense of wonder and curiosity from his parent’s book collection and was also amazed at how old some of them were. This fascination stuck with him.

In 1978 he opened secondhand Jermy and Westerman in Nottingham, UK with a friend, and created the Tasmanian version in 1990 when he immigrated to Australia to be closer to family. The original Nottingham store was sold on and continued to be well regarded and known, however was sadly closed in 2019.

Clearly a fan of the arts, books aren’t Pete’s only passion and another childhood hobby has also stuck with him all of these years: drumming. Before opening his first bookstore he spent time living the rock and roll lifestyle as a professional drummer, touring with well known Britpop band The Honeycombs. He still continues playing to this day, providing a rhythmic backbone to many bands along the coast, and a regular face in local musical events and committees.